6am and a rainy start for the City fans as they headed down the M6 to Wembley, where less than a month ago they had despatched Manchester United in the Semi-Final, and were now looking to win that elusive trophy which would end the 35 year hoodoo that the team from Trafford had been regurlarly reminding them of.
The only thing in City’s way were Stoke, they themselves were looking for a fairytale win to see them lift the famous trophy for the first time in their history, indeed the neutrals and the media were tipping the team from the Potteries to turn City over in the final.
The sun came out at Wembley and the fans were determined to enjoy the day, Wembley Way saw both sets of fans sharing a friendly, carnival atmosphere prior to the kick off.
Once inside the stadium the noise was deafening as both sets of fans belted out Blue moon and Delilah before joining X Factor’s Stacey Solomon and Tenors Unlimited (who?) in rousing versions of Abide With Me and The National Anthem. Both managers had injury worries prior to the game, Roberto Mancini had seen talisman and captain Carlos Tevez play just 10 minutes midweek after his hamstring injury kept him out of the semi-final. For Tony Pulis there were doubts over Matthew Etherington who hadn’t played since his hamstring injury and also Robert Huth who had a knee problem, as it was all three players were named in the starting 22.
The first ten minutes of the game set the stall for the rest of the half, as City attacked Stoke from the first whistle, Micah Richards missing the target from a Kolarov corner and then Carlos Tevez hitting a 20 yarder that Sorensen beat away rather than attempting to catch. City forced two further corners before Yaya Toure went close with 30 yard screamer. Stoke were clearly struggling to deal with City’s powerhouse display.
The only real attack Stoke had in the first 15 minutes was a speculative Delap long throw which came to nothing.
Huth was openly struggling with his injury and perhaps it was this frustration that made him elbow Mario Balotelli in the neck, amazingly none of the officials saw it, as certainly Huth would have received his marching orders.
City were running the game and Stoke could only make the odd inroad into City’s half but could not trouble Joe Hart in the first 20 minutes, however Kenwynne Jones has a half chance on 21 minutes that England’s number one easily collected.
It was then a lively Mario balotelli who nearly put City in front midway through the first half as he curls a fantastic shot into the top corner, but Sorensen makes a marvelous fingertip save to turn the ball away for a corner.
On the half hour Stoke have a penalty claim turned down by referee Martin Atkinson, Jones trying to bundle past Vincent Kompany in the box and the ball hitting the Belgian defender’s hand rather than hand to ball.
It’s all Stoke for the next five minutes but they fail to make a real chance. unlike city who really should have gone 1-0 up ten minutes before the break when Balotelli’s shot was parried to David Silva, but from just ten yards out the diminutive Spaniard hit the ball into the ground and the ball bounced over the bar.
The rest of the half petered away with City managing just a couple of efforts both off target. Roberto Mancini must have been happy with City’s first half display but a little concerned that they couldn’t turn their superiority into goals. 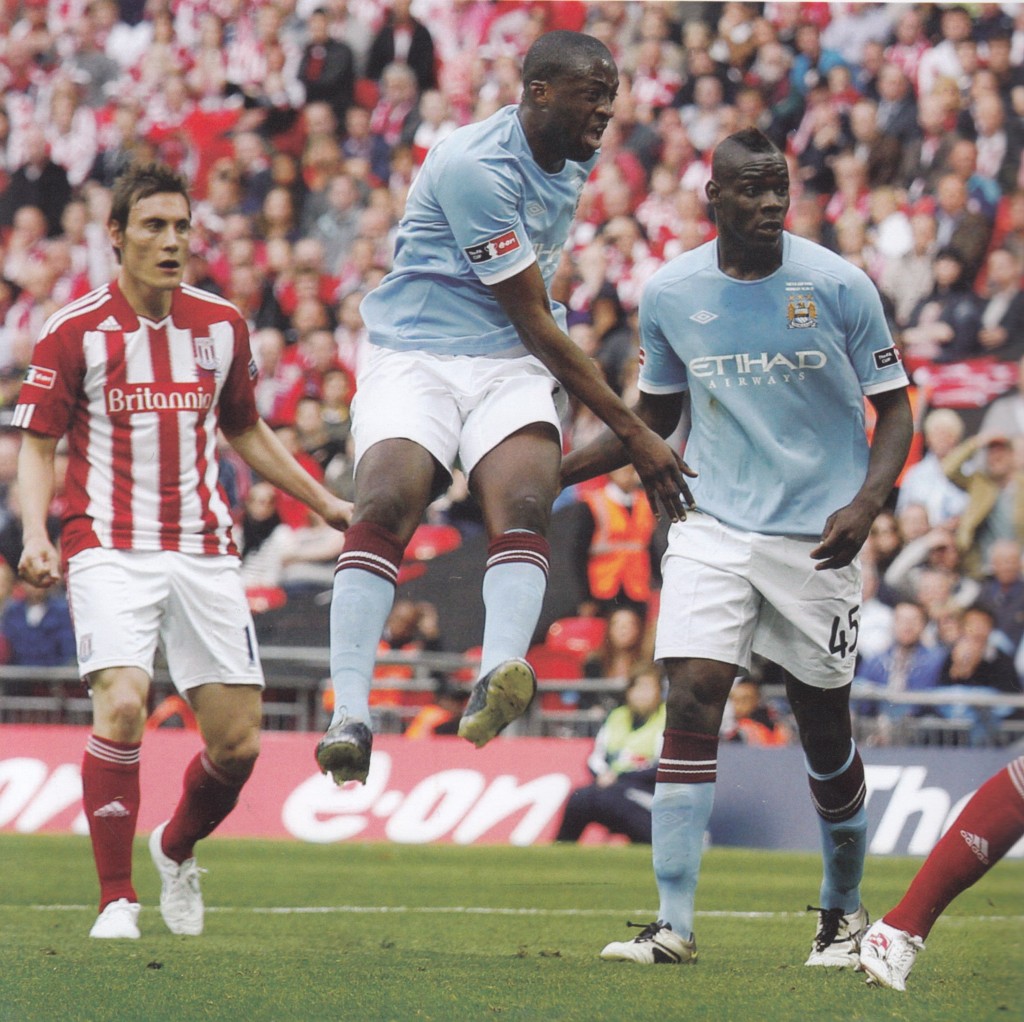 Stoke came out for the second half looking a little more dangerous and had more of the play and it was down to Balotelli back in his own box to block a Jermaine Pennant shot on goal.
The game was now delicately poised and just after the hour Stoke nearly went in front when a long ball from the defence was latched on to by Kenwyne Jones, unerred by Joleon Lescott’s challenge he hit a good shot from ten yards which Joe Hart superbly blocked.
bouyed by this Stoke had a further chances when Shawcross volleyed wide and Pennant hit a free-kick weakly into a resolute sky blue wall.
Both sides had made substitutions the clearly unfit Etherington was replaced by Whitehead and Adam Johnson came on for Gareth Barry to try and give City a more attacking option.
With 15 minutes to go City got the goal their performance deserved, Super Mario combined well in the box with David Silva, the young Italian stabbed a shot at goal which rebounded off a combination of Tevez and Stoke defender on the six yard box and who was there to smash the ball in, none other than semi-final goal hero Yaya Toure.
The City fans and staff went wild with the knowledge that they were just fifteen minutes away from their holy grail, Wembley was a sea of sky blue and the Poznan had returned to North London.
The last quarter of an hour was comfortable for the Citizens with man of the match Mario Balotelli showing why Mancini brought him to the club as he held he ball up and continually caused concern for Stoke’s defence.
Carlos Tevez was replaced by Pablo Zabaleta to tumultuous applause with two minutes to go.
Stoke put the blues defence under some pressure in the three added minutes of stoppage time but City were strong and resolute as ever, referee Atkinson blew the final whistle and City had won the Cup they so deserved. 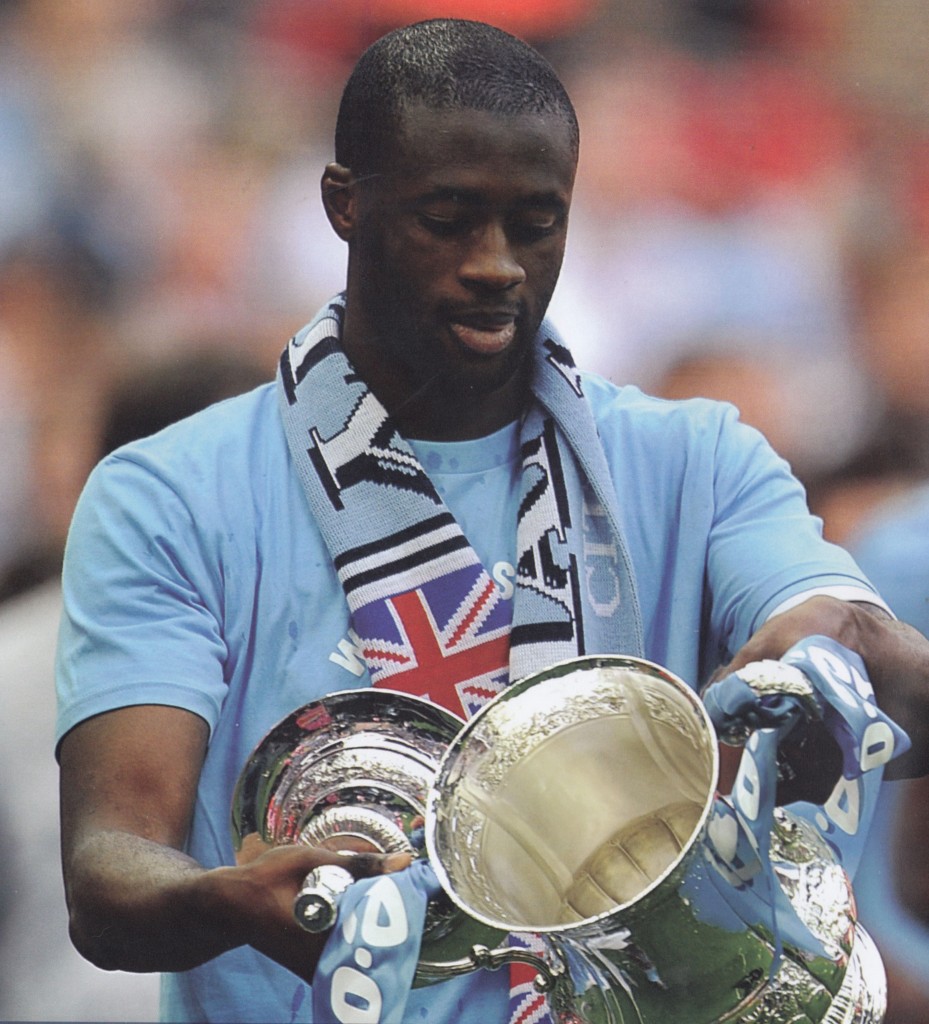 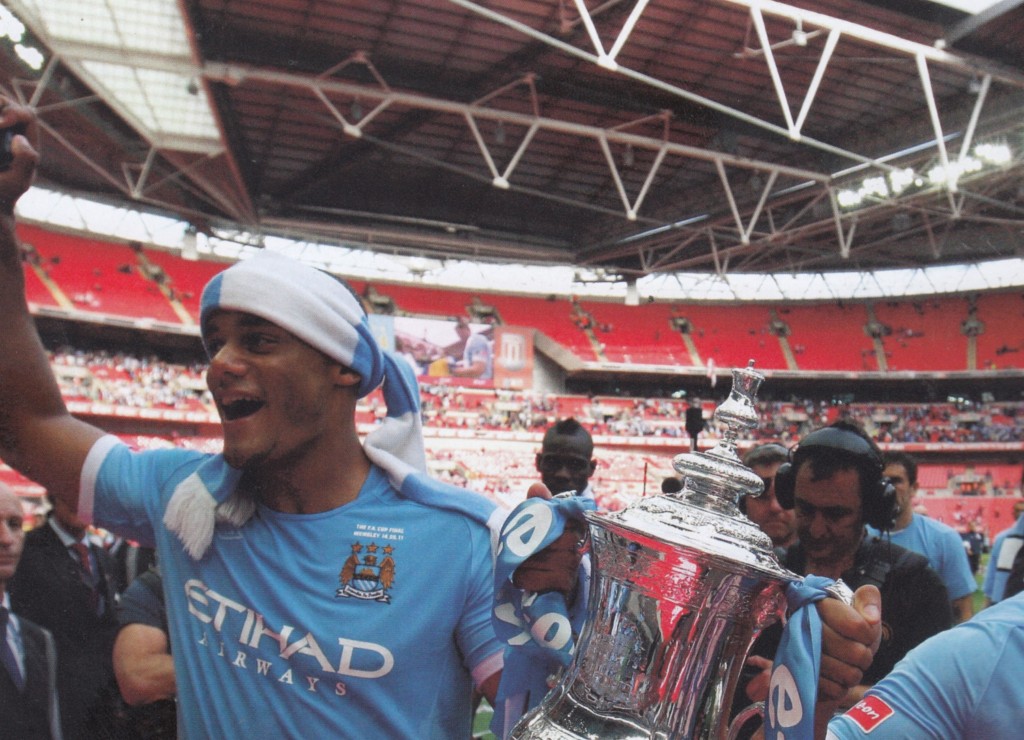 The players went wild celebrating on the pitch and there wasn’t a dry eye left amongst the magnificent Manchester City fans who had waited so long for this moment.
Stoke fans should also be applauded as they stayed in the stadium to cheer on their team as they received their runners up medals.
It was then time for Carlos Tevez and the team to climb the 107 steps to collect the FA Cup and when the little Argentinian maestro held the cup in the air the noise from the west side of the stadium was deafening, each player collected their medal and in a sentimental tribute by City, Bernard Halford wearing a red and black scarf in memory of Neil Young was presented with a special medal for his services to the club.
What a fantastic day for Manchester City Football Club, a day that demons were exorcised, ghosts were laid to rest and new Manchester City legends were made. 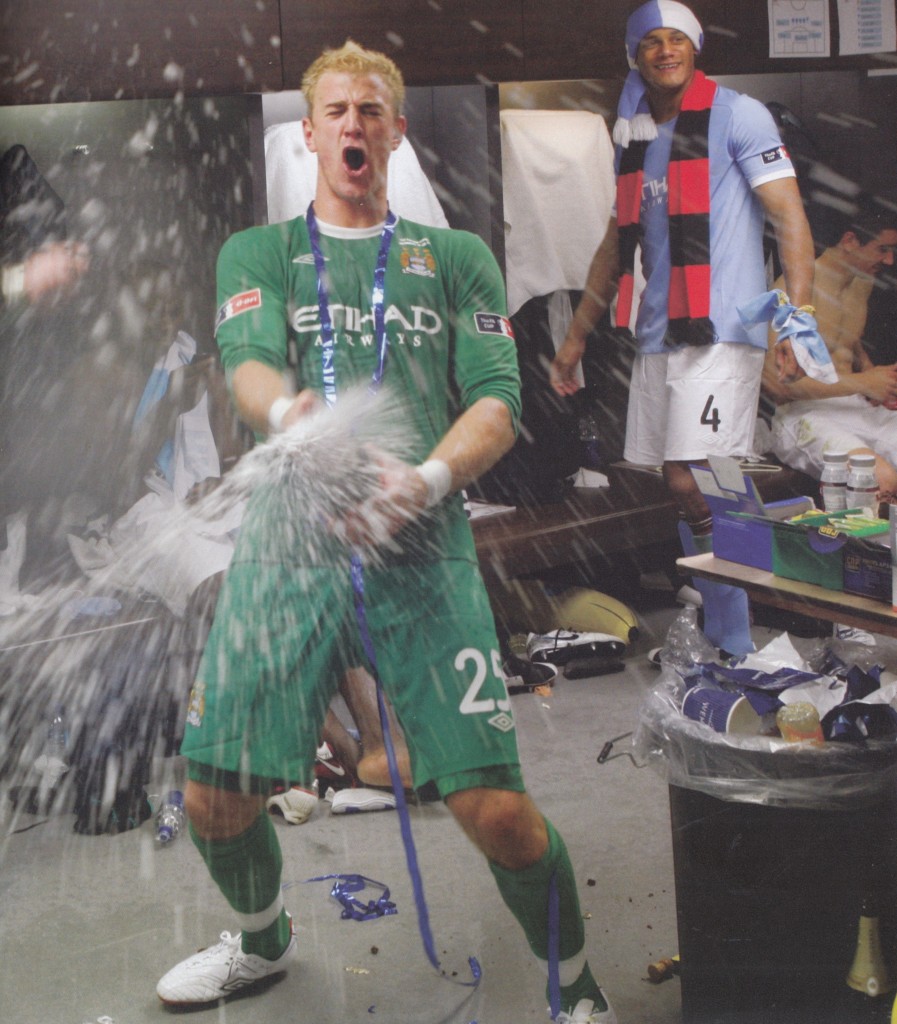 Thirty-Five years, two months and 17 days ago Manchester City won the League Cup. A generation has passed in which this famous football club had been reduced to being the punchline of everybody’s favourite football joke, their capacity for calamity unrivalled throughout the leagues. And though they may have had the most expensive image makeover in history, coming in at around £300million on players alone, yesterday they finally shed their status as the comedy club of England, possibly forever. For Manchester City won the FA Cup and the fact that their bitter rivals from across the city had won a record-beating 19th league title shortly beforehand mattered not a jot to those long-suffering supporters who celebrated at Wembley. When Yaya Toure struck from inside the penalty area on 74 minutes, after some superb work from David Silva and Mario Balotelli, he broke what sometimes had seemed to be the longest curse in football history. Even as the net bulged, the infamous banner at Old Trafford which celebrates the length of City’s trophy drought was being dismantled. By then there was no doubt that City would complete the task. So It was not one of the great finals; Stoke’s best player by far was goalkeeper Thomas Sorensen, which told its own story. ‘Our greatest disappointment is that we haven’t really reached the level of performance we have shown in the past few weeks,’ said Stoke manager Tony Pulis. ‘Perhaps we ran out of depth in our squad but even so, it is disappointing.’ Yet the significance of the day did not lie in the quality of the contest. Roberto Mancini However stratospheric the ambitions of Sheik Mansour, the club’s owner, might be, that represents a seismic change in City’s fortunes. Mancini is infuriating at times, his commitment to caution unparalleled in the Premier League. But on Saturday, starting with Carlos Tevez – a captain whose last significant act at the club could well be lifting the FA Cup – Silva and Balotelli showed an altogether different side to the man. Balotelli was the principal gamble of the day and how he repaid his manager; his back-heel that indirectly led to the only goal of the match was the game’s delight. When he had received an elbow to the throat on 15 minutes from Robert Huth that went unpunished, you feared the worst for the volatile young Italian. Mancini winced when reminded. ‘This was difficult for him,’ he said, with a wry smile. ‘But I said to him before the game, “If I see that you are nervous and don’t think about the game, then you will come off”. I think it is now important he realises he has a big talent and he can’t lose his big talent.’ On Saturday Balotelli’s talent rather than his temperament dominated. His stunning first-half strike from 25 yards that produced an even better save from Sorensen, diving to his left – justifiably labelled the ‘save of the season’ by Pulis – was the best of several first-half contributions from wide left. Tevez and Silva played admirable supporting roles yet the Spaniard must have been filled with acute embarrassment on 36 minutes. Eight yards out with Sorensen stranded, Silva drove the ball into the ground and saw it bounce over. By then, City had accumulated several first-class chances: Tevez, on five minutes, had one turned away by Sorensen; Toure’s swerving effort form 45 yards was just wide; Vincent Kompany’s shot was parried by Sorensen. Early in the second half, Aleksandar Kolarov drove into the side-netting. Yet, with an hour gone and City utterly dominant, Kenwyne Jones managed However, Sorensen’s excellence apart, the best you could say of Stoke was that Huth and Ryan Shawcross defended manfully in the face of serial trickery from City’s front three. Overwhelmed in midfield, it took 21 minutes to register a shot, from Jones, that was easily blocked. More consistent with the flow of the game was Balotelli’s impish back-heel which released Silva, who returned the ball to the Italian. Though Balotelli’s shot was blocked, it rebounded in a crowded penalty area to Toure, whose left-footed strike was low, fierce and finally defeated Sorensen. With 74 minutes gone, it seemed as though we had been waiting an age for it to come. Then again, half of Wembley had been waiting a generation. ROB DRAPER WRITING FOR THE MAIL 15TH MAY 2011