MICAH RICHARDS produced the last-kick equaliser that suggests Stuart Pearce’s Beanie Baby horse given him by his daughter might iust become the most important article in the Manchester City kit-bag. Before Joey Barton gave a whole new meaning to Blue Moon after the final whistle City looked dead and buried until the luck that came with that little toy the previous week against West Ham. Andy Johnson*s sixth goal in the seven games since his £8.6million arrival looked about to send Everton soaring into second place in the Premiership. Even in the panic of the Goodison rearguard as the clock ticked down it looked like they would take the points when Georgios Samaras struck a post. But Richards, who first made his name with an FA Cup fifth round equaliser against Aston Villa last season, smashed home the strike that takes a touch more pressure off Pearce. Last month Richards angrily threw his shirt at the manager when he was replaced at Reading. Yesterday the 18-year-old was kissing the badge, Pearce declaring: “Micah is so big he could jump to the moon if he wanted and I’m pleased for him, But I’m also pleased that they gave me some stickability out there. That is what we have been lacking” City had actually been in control until Johnson struck. And they might have remained in that position if the new icon of Goodison hadn’t used his body to send Sylvain Distin flying over the by-line. None of the officials spotted the foul but from that moment City’s impressively calm organisation disintegrated. Johnson used that blatant act of opportunism to slide the ball into the box for James Beattie. Pearce’s side looked to have survived when the big striker mis-hit but the scramble that followed resulted in possession on the right touchline for Phil Neville. He drove his cross in at waist height and Johnson connected brilliantly 10 yards out, even if his shot was helped into the net off the back of the unfortunate Distin. That 44th-minute strike was a precursor for a far more entertaining seoond half. It also gave Everton the momentum to move forward more adventurously. Nicky Weaver was forced to display many of the talents that had, before his nevenending injury problems, suggested he might one day play for England. He arched backwards brilliantly to touch away a wild miskick from his own midfielder, Stephen Ireland. Seconds later he again reacted to touch away a shot from Michael Arteta after Johnson had set up the opportunity. Everton’s new hero reacted first, but Dunne threw himself to the ground to block on the line. Weaver delivered again, parrying from Lescott’s header before Tim Cahill sent another aerial effort snaking an inch wide of the upright. It seemed David Moyes’s side were on course to move into second place, until they were forced into panic mode.  Samaras, who in the 64th minute had sent his sides best chance of the game wide, scuffed  a shot on to the foot of a post right at the end of normal time. With Everton how rocking, City sensed there might still be salvation and Richards delivered it, smacking his shot home off the underside of the bar after Bernardo Corradi had touched on a final, desperate punt from Distin.   KEN LAWRENCE WRITING FOR THE SUNDAY MIRROR 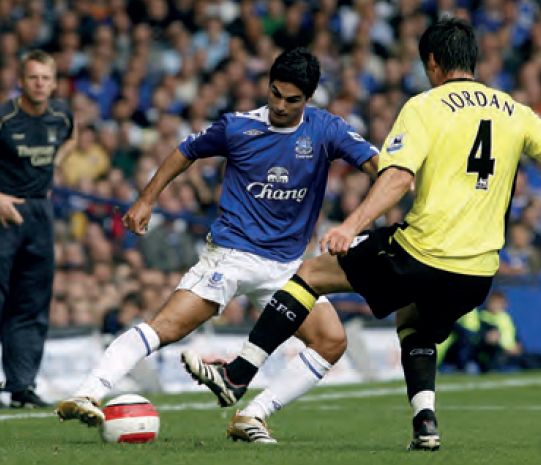