Everton who scored the only goal of the match at Maine Road in August, were the latest to learn at first hand that Manchester City’s convalescence is being maintained. On Saturday at Goodison Park, City recorded their first away win of the season by a misleading margin of 3-2, and incidentally completed a hat-trick of victories on that ground. Considering the miserable conditions, it was an interesting game, although … Everton were disappointing especially in front of goal where their forwards insisted on falling over themselves or over the ball instead of staying upright and kicking it into the net. Once or twice they showed promising ideas, but these were more individualistic than collective, and Everton’s teamwork never matched City’s. In the absence of Royle, Belfitt made his first appearance at home, a fortnight after he had scored Ipswich Town’s second equaliser at Goodison. He did so well that local supporters wondered where he will be fitted in when Royle again is available. Kendall was brilliant, and Hurst as usual gave a thoroughly workmanlike performance. But somehow this was not the Everton of old. … Everton’s deficiences must not detract from the merit of City’s performance… From a personal point of view the most satisfying feature was the work of Donachie, Barrett, Jeffries and Carrodus. Mind you, this is nothing fresh for City. When they won the FA Challenge Cup in 1956, six of their team cost next to nothing. Sixteen years later, they are still at it, playing “unknowns” alongside costly investments and getting just as good value out of them. … City took the lead after seven minutes and 10 seconds. Carrodus beat Scott and Hurst brilliantly, and when he centred, Lee forced the ball into the net off Lawson’s body. Bell then headed over the bar from a centre by Marsh, but in the 16th minute, Everton equalised. Scott centred, Connolly headed the ball down and Belfitt scored from close in. Whereupon “Congratulations Rod” appeared in lights on the information board, Smart work, that In the 32nd minute Book and Bell combined to give Marsh an opening, and when Marsh’s shot was blocked, the ball rebounded nicely to Lee, who restored City’s lead. … In the 67th minute Bell hit a post after fine work by Lee and Summerbee, and shortly afterwards when Summerbee centred, poor Newton beat his own goalkeeper with one of the best headers of the season. Ten minutes from the end, Barrett had his name taken for deliberately handling the ball, and after Kendall’s free kick, Connolly hit the crossbar, and Kenyon celebrated his 100th appearance by scoring the rebound. EXCERPTS FROM ERIC TODD’S REPORT IN THE GUARDIAN 13TH NOVEMBER 1972 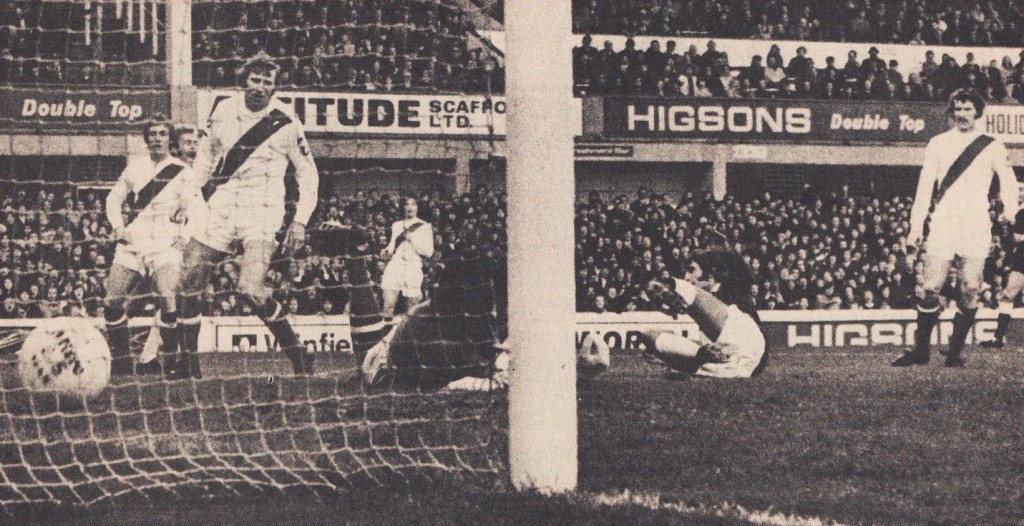