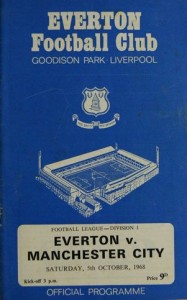 Manchester City turned in a second half display that revealed them as fighting champions defending their homnour and glory.
Unfortunately their pathetic first half performance at Goodison Park had seem them already throw away the points when the Blues could hardly raise enough steam to even dispute what clearly looked an offside second goal by Joe Royle.
There was no doubting the 27th minute effort Alan Ball had curled in from the acute angle out on the right, but when Royle tamely headed in Colin Harvey’s cross 12 minutes later, there was hardly a City defender in site.
And that naturally raises the question of why the Everton centre forward was not being marked, or why Harvey was allowed to run so far with the ball before making the centre.
For City again had an attack of defensive jitters with poor George Heslop once more bearing the brunt of the criticism in the middle.
Harry Dowd in his first League game for 12 months, could hardly be blamed for either goal. In fact, the man who replaced Ken Mulhearn rarely had to break sweat against an Everton side, which had little in the way of real bite or guile up front, despite their midfield talent.
When City raised their game after half-time it was too late. Mike Summerbee, spirited earlier, had lost his bite following a 12th minute injury when he was carried off with what at first had been suspected as a broken leg.
Colin Bell featured in some spirited runs, Neil Young jabbed in a shot which brought the save of the match from Gordon West, and Alan Oakes and Glyn Pardoe played immaculately behind them.
But perhaps Everton considered they had already done enough to win the match. Or that they were superbly confident that Brian Labone and company could adequately hold a City side obviously still suffering from their shattering experience of European Cup defeat in Turkey.
PETER GARDNER WRITING IN THE MANCHESTER EVENING NEWS 7TH OCTOBER 1968