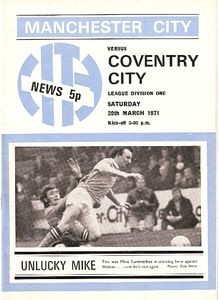 …City were forced to use a number of relatively inexperienced players – goalkeeper Ron Healey (making his first home appearance), Willie Donachie (only his second League start), Derek Jeffries (introduced in League football in October), and debutant Ian Mellor.
Twenty-one-year-old ex-postman Mellor was viewed by both Mercer and Allison as a terrific prospect but clearly would have preferred a more stable period to introduce the player. Nevertheless, Mercer told reporters: “He looks a very exciting player. As a late developer he’s a bit of a Tony Book. I’m confident he will not let us down.”
In the 31st minute Coventry took the lead with a headed goal from England under-23 striker John O’Rourke, and the visitors had control for much of the first half. In the second however City’s youngsters settled and regained the upper hand. According to reporter Peter Gardner 18 year old `keeper Healey was one of City’s more confident men: “He could do nothing about O’Rourke’s header in the 31st minute. But he went on to match the magnificent Glazier as City, lifted at last by Colin Bell in his roving role, found a little of the form that has deserted them recently.”
Six minutes from time City’s greater possession brought a goal via a penalty from Francis Lee – a decision hotly disputed by Coventry. The goal was Lee’s first penalty of the season and his 12th League goal. It was enough to salvage a point and give the Blues some confidence for the ECWC tie with Gornik. City had lost the first leg 2-0 and many newspapers focused on City’s difficult task. They also commented on City’s new players – in particular Mellor.
Peter Gardner: “Ian Mellor looked out of his depth in the first half but then suddenly found confidence in his own ability and finished up by giving £100,000 full back Wilf Smith a second half chasing.”
Bob Russell of the Daily Mirror was less positive: “Mellor, the lanky and delicately deceptive winger drafted in for this emergency is NOT ready for the mighty struggle against Gornik at Maine Road on Wednesday. Someone stronger, more vibrant and dynamic than this flickering, immature 21 year old is required to crack the confidence of a powerful team fortified by a 2-0 lead from the first leg.”…
ADAPTED FROM AN ARTICLE BY GARY JAMES IN THE CITY PROGRAMME 3RD MARCH 2002