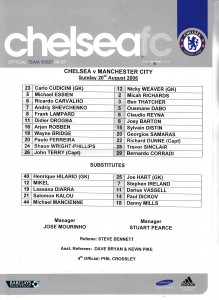 It was always going to be a tough ask for Stuart Pearce and his side to get anything from the opening game of the season at Stamford Bridge, and so it proved.
As early as the 11th minute they were chasing the game as Chelsea captain John Terry glanced in a Robben free-kick to put the home side in front, and before half-time the game was over as Frank Lampards effort was deflected passed Nicky Weaver by Richard Dunne.
City’s position was even more exacerbated when new signing Bernado Corradi was sent off after a second yellow card was issued by referee Steve Bennett following the Italian’s reckless challenge on Michael Essien, who was lucky to stay on the pitch himself as he retaliated by pulling Corradi by the hair.
Didier Drogba grabbed the third and final goal for Chelsea in a game when reallistically they could have scored at least five.