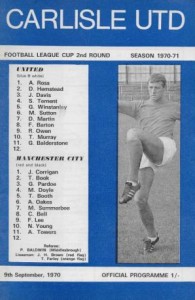 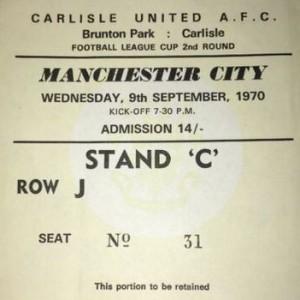 IVOR BROADIS WRITING IN THE NEWCASTLE JOURNAL 10TH SEPTEMBER 1970
The graveyard of champions claimed its most illustrious victims last night, City, League Cup holders and European adventurers, are out of this season’s League Cup, swept to defeat on rain-lashed Brunton Park by a Carlisle side that looks set to repeat the stirring deeds in the competition last year.
On a memorable night when both teams banished negative defensive football to the pastures of the lesser talented sides where it belongs, goals by Denis Martin and Dave Hatton, after Francis Lee had equalised on the hour, pushed Carlisle deservedly into the third round draw.
The stark unvarnished truth is that on the night Carlisle boasted more players who hit form, showed a greater enterprise running off the ball when they had possession and greater challenge when they went looking for it.
If the ball skills in a cracking game came from men like Lee, Summerbee and Bell, there wasn’t nearly enough of it to compensate for the drive and willingness to run for each other of the home side.
And the black and red shirt that City have worn so proudly over the years would have fitted snugly across the shoulders of skipper Chris Balderstone, who controlled his heroes like a “Proms” conductor, and the talented ball-playing Martin.
After Frank Barton had been given time to chest down a cross from the right, turn and fire just wide by a charitable City defence, it was Martin, paying off a chunk of his £20,000 fee, who applied the match to the powder keg in the 14th minute.
His long raking cross from the right had to be watched all the way by the bulky Corrigan before he tipped it late for a corner.
Balderstone’s kick was two-handed behind for a second corner, then the big ‘keeper came well out of his goal to paw at the ball like a kitten, only helping it on to Martin.
He met it on the half volley to rocket an angle shot that threaded across a crowded goalmouth to hit the net high up.
In the 50th minute they might have gone further ahead. A great run by Hatton took him to the bye-line on the left, and Martin met his chip over Corrigan to power the ball for the angle of post and bar, only for the big’keeper to recover and punch for a corner.
Looking for the equaliser, City often looked stretched at the back and Hatton swept past Towers to set Frank Barton up just inside the box.
But the advancing Corrigan beat down his drive one-handed for a corner.
Right on the hour a slick City move put them level, Bell slipped Barton’s neck-or-nothing sliding tackle on the right to serve Summerbee and run on to the return pass down the right. He flighted his cross into the goalmouth and defenders stood off as the hungry Lee came in to ram the ball home from close in.
For a time, United lost their rhythm a little, and with City at last looking a little more assured, Bell chipped one accurate cross over Winstanley for Lee to stick out a foot and prod straight at Ross.
Their search for the winner was City’s undoing. In the 74th minute they left only one defender at the back, with Towers responsible for the strong running Hatton.
Barton picked up a ball from defence to hit a 25 yard pass that Hatton took in his stride, leaving Towers, he cut in from the right, trailed the ball across Corrigan as he came out and tucked it safely away left footed.
The goal heralded frantic City efforts to get back on terms, but Carlisle held on to their lead.