EXTRACT FROM CLASSIC MATCH IN THE CITY MAGAZINE MARCH 2009   …Rovers had only lost one of their opening tive games and had conceded just five goals in the process so anything but an easy ride was expected by the 25443 crowd, the third highest in the country that day. City wore a Saab sponsored all-sky biue kit with Rovers, backed by around 1,000 travelling fans, in yellow. With the sun shining and the Kippax in good voice, the Blues were quick to force the issue and with just 11 minutes on the clock, Andy May put the hosts ahead with his second goal of the campaign, but there was much more to come. On 27 minutes, City went 2-0 up thanks to a cracking drive from Parlane who was quickly becoming a crowd favourite. The tall former Leeds United and Rangers striker didn’t do a great deal outside of the box, but in it, he looked a predator and though there was concern when he hobbled off for treatment on 35 minutes, he returned to put the game beyond doubt on 41 minutes when he made it 3-0 from close range. City were rampant and Tolmie and Parlane looked as though they’d been playing alongside each other for years and the pair continued their scoring exploits after the break, with Parlane completing a 23- minute hat-trick on 50 minutes and Tolmie adding a fifth on 52 meaning they had now scored 11 of City’s 13 goals. l/|cNei|| must have been chuffed his gamble on the pint- sized Tolmie was paying off. He’d paid Lokeren 230,000 to secure his services and this after Tolmie had failed to score in 18 appearances for the Belgian side. The 12-time capped Parlane was less of a risk, even aged 30, though at Leeds he averaged a goal in every five matches. If lVIcNeiIl was to guide City back to the First Division, he’d need Parlane and Tolmie to continue their rich vein of form throughout the season. The Blues still had time to really rub Blackburn’s noses in the mud with Baker adding a sixth before full-time. It was the biggest home win since Leyton Orient had been beaten by the same score in August 1964 and it pushed City into second place in the table, a point behind leaders Sheffield Wednesday. Three successive league wins followed to put l/lcNeilI’s men at the division’s summit, but the squad’s frailties emerged as the months passed by and despite the Tolmie/Parlane partnership yielding a total of 34 goals, City finished fourth, 10 points adrift of third placed Newcastle. 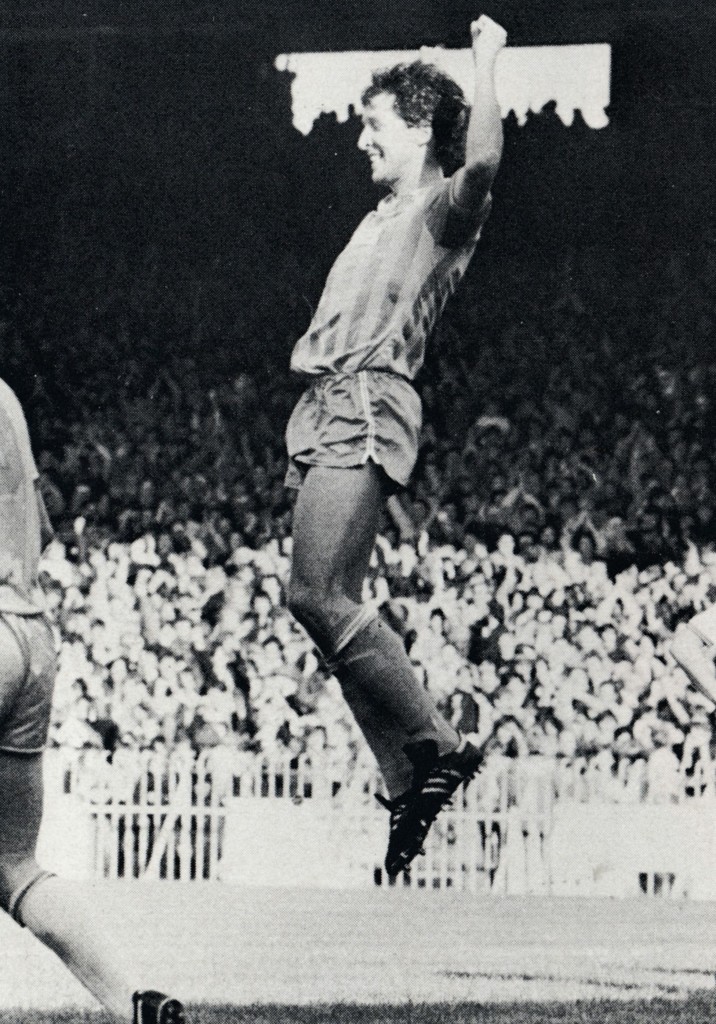 DEREK PARLANE RECEIVES HIS AWARD FOR MAN OF THE MATCH