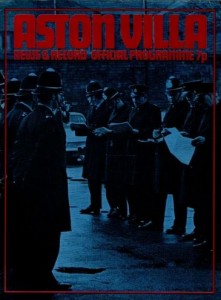 …For the Blues’ boss, trophy success in 1972/73 was vital, starting with a must win Charity Shield match. To achieve his aims, Allison was not afraid to make unpopular decisions and the day before the game journalists revealed the shock news that the experienced and hugely popular 30 year old Alan Oakes had been left out of the squad. Other favourites like Francis Lee and Colin Bell were there of course with Mike Summerbee gaining most headlines for his performance on that August afternoon. Summerbee adopted a more physical role than usual and, under the headline “City – Midfield Buzzer”, The Manchester Evening News claimed “His bite in the tackle and willingness to work made him the outstanding performer against Aston Villa, whose reluctance to come out and match the Blues’ attacking endeavour led to a colourless and at times, unenterprising clash.” As the newspaper suggested the game was not the most enetertaining match ever played. However City, wear their ultra modern white shirts with diagonal sash and numbered sleeves, did make several significant attempts on goal with Villa ‘keeper Jim Cumbes recognised for several good saves at key moments. Unusually for this period in football, City were allowed to make two substitutions during the game. As well as Ian Mellor replacing Wyn Davies, Derek Jeffries replaced Willie Donachie, who had badly injured his left ankle ligaments and was forced to leave the field midway through the second half. Despite Donachie’s injury, City pressed on and took The Shield: “City’s winning goal was a 70th minute penalty by Francis Lee after Jim Ciumbes, whose earlier brilliance had deprived Rodney Marsh of a goal with the best effort of the game , had held back Summerbee”.
FROM AN ARTICLE BY GARY JAMES PUBLISHED IN THE 2012 CHARITY SHIELD PROGRAMME