After their greatest season in over 40 years City’s staff, players and fans were looking forward to a new season that would see Champions League football for The Citizens for the first time. A few days before the players returned to pre-season and amongst a plethora of transfer rumours City made their first signing as left back Gael Clichy joined from Arsenal for a modest fee of £7M, however even before the ink was dry on the young French defenders four year contract The blues were stunned by a statement from captain Carlos Tevez as he announced he must leave the club before the season starts, citing his need to be in a country where he can be with his children. The question was who could afford to buy him and pay his wages! Just a few days later the club, fans and ex players paid tribute to legend Mike Doyle at his funeral in Ashton Under Lyne, the former Blues captain and City’s most decorated player had tragically lost his fight against a  liver disease at the age of 64 on 27th June 2011. 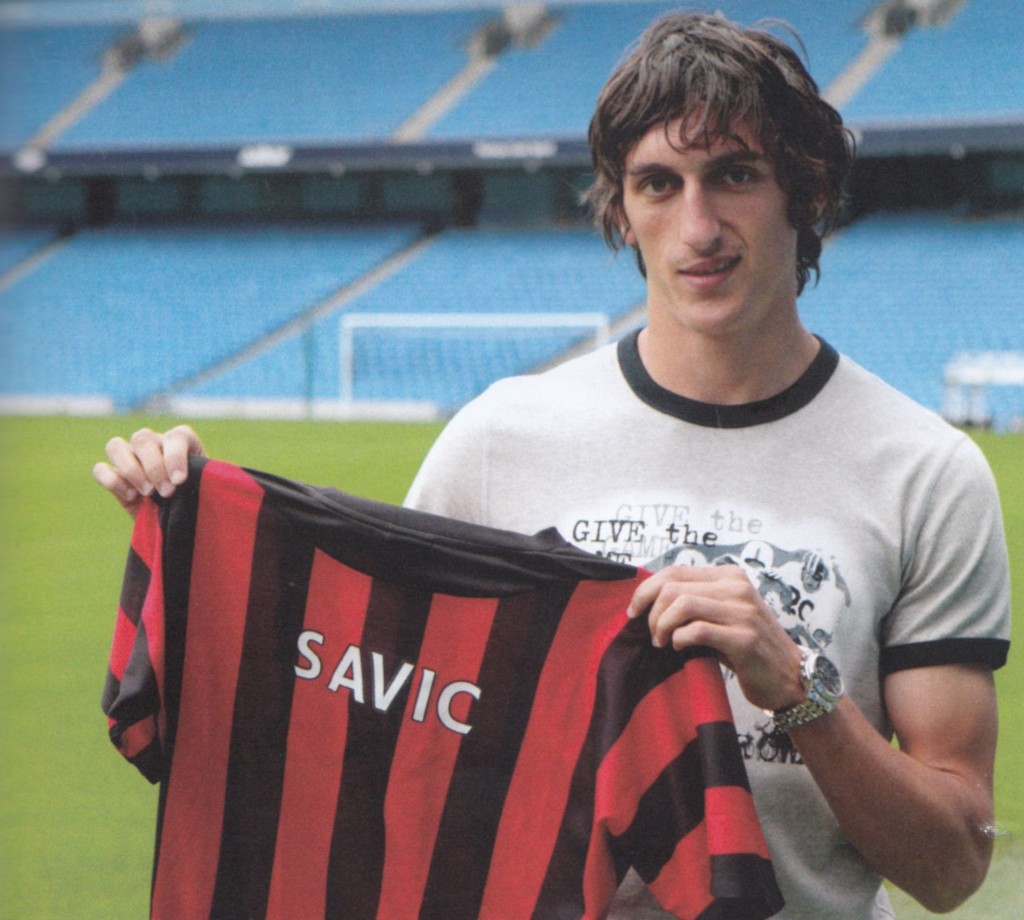 Roberto Mancini then again added to his defence by bringing in 20 year old Montenegro stopper Stefan Savic from Partizan Belgrade for a fee of around £7M. 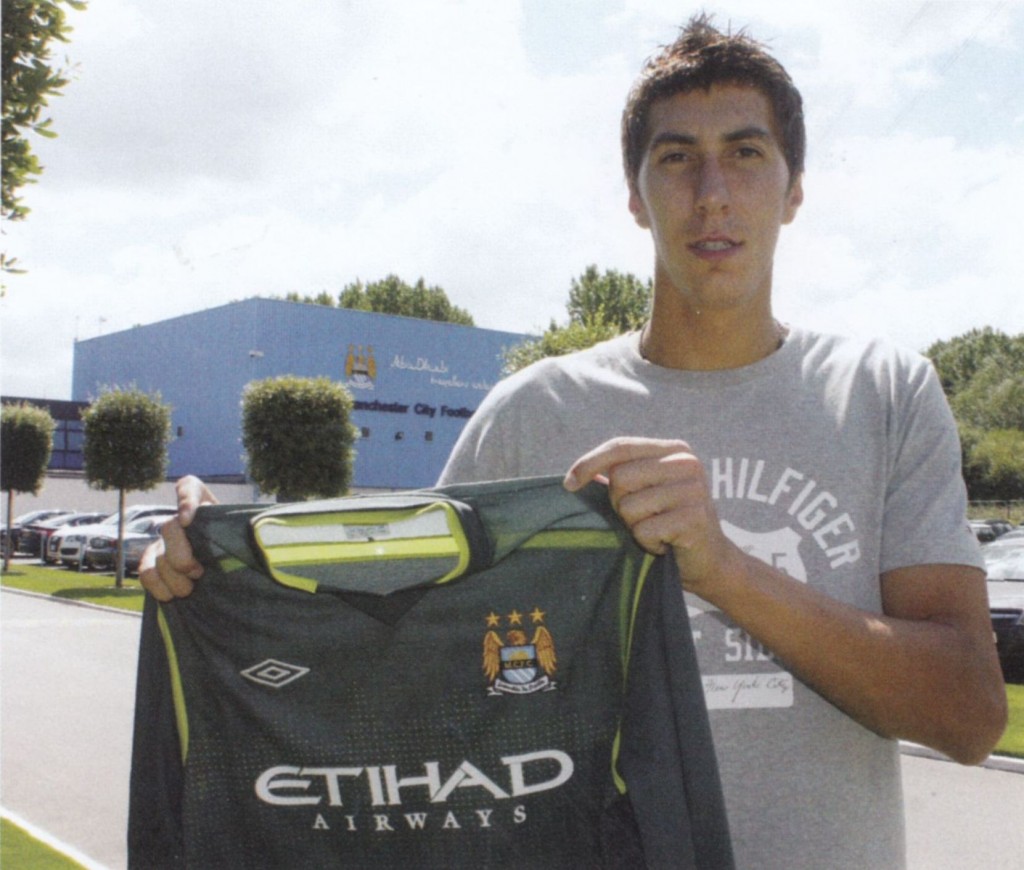 Also City brought in a new backup keeper, Costel Pantilimon on an initial one year loan from FC Timisoara. 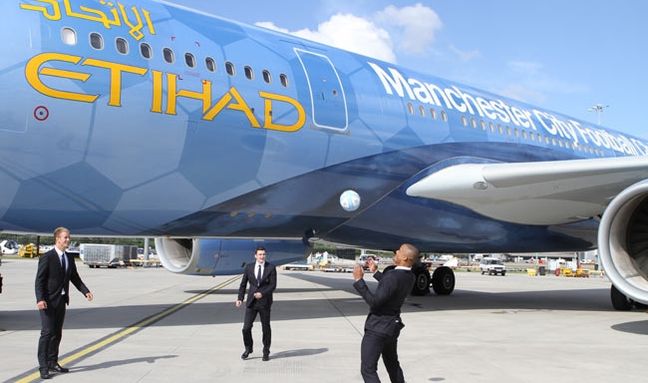 On the day the squad flew out to the US for a pre-season tour City announced a deal with Etihad Airways which included naming rights for the stadium and surrounding areas and an improved shirt sponsorship deal thought to total over £200M over ten years. Whilst the club were training in the US the first bid came in for Carlos Tevez from an unexpected country as Brazilian side Corinthians offered a reputed £35M for their former player, the bid was turned down as it did not reach City’s valuation. Patrick Vieira who had left City at the end of the season and announced his on retirement from the game as a player, rejoined the Blues backroom staff in a newly created role of Football Development Executive. With the prospect of first team  football unlikely this season at City, 21 year old Ben Mee looked to gain more experience as he went on a season long loan to Burnley. city’s pre-season then got underway with two games in less than twelve hours, on home soil a young City eleven which also included Craig Bellamy, Nedum Onuoha and Michael Johnson beat Altrincham 2-1 at Moss Lane, then at 1am British time the US tour got underway with an impressive 2-0 win over Mexican side Club America in San Francisco. There was plenty of transfer activity back in Manchester with players moving away from the Etihad Stadium, Jerome Boateng got his wish to move back to Germany, however Bayern Munich had to pay around £13M to poach the young defender from City. Shay Given was also on the move as he joined Aston Villa for a fee of around £3.5M. City moved on to a very rainy Canada for the second game of their tour and on a sodden and dangerous artificial pitch The Blues beat Vancouver Whitecaps 2-1, but saw Yaya Toure worryingly carried off as he turned his ankle on the unplayable pitch. Carlos Tevez’s proposed transfer to Corinthians fell through as the clubs could not come to a financial agreement before the Brazilian transfer window shut, however another South American, Jo did leave for Brazil as he joined Internacional, there was no mention of a fee involved. A strong second stream City team then beat Stalybridge Celtic 4-2, before the senior squad finished their tour of the US as they drew 1-1 with LA Galaxy, as the American way the friendly was decided on ‘PKs’ Joe Hart grabbing the winner in a 7-6 shootout victory. Two players were then announced to be going out on loan for the season to Championship sides, Kieron Trippier to Burnley and Michael Johnson to renew his relationship with Sven at Leicester. City then announced their intentions for the new season with a club record signing as they paid Atletico Madrid £38M for the services of the exciting 23 year old Argentinian striker Sergio ‘Kun’ Aguero. The Blues then took part in The Dublin Super Cup where they played two games in two days. Roberto Mancini picked a second string team for the first game against an Airtricity Irish XI which City won comfortably 3-0. The next day Mancini chiose his strongest side available and although it was only a friendly the Blues put up an impressive performance to beat Inter Milan 3-0 and to lift the first Dublin Super Cup. It was a third trip to Wembley in four months for City as they met Manchester United in the tradional season curtain raiser, The Community Shield, and although City led 2-0 at half-time United took the trophy eventually winning 3-2. And so the season started and City certainly put down a marker, as they beat Swansea 4-0, to go top of the league, with Bolton. City had 30 attempts on the Swans goal and Kun had the perfect debut as he came off the bench with less than 30 minutes left and scored two and made another with a headline making performance his father in law, Maradonna, would have been proud of. With both City and Bolton scoring four goals without reply on the opening weekend of the season they both sat at the top of the table and the two teams met at the Reebok where The Blues turned on the style again and won 3-2 to top the table with Manchester United in second place. Roberto Mancini had been openly chasing Arsenal’s Samir Nasri all Summer and with a week of the transfer window left he finally got his man, City paying the Gunners a fee of around £25M for the diminutive French midfielder. Out of favour Emmanuel Adebayor then joined Tottenham on loan for the rest of the season, Young belgian defender Dedryck Boyata also went out on a season long loan to Bolton. Samir Nasri made his debut at White Hart Lane in an amazing team performance that will be talked about for many years by City fans. The Blues tore Tottenham apart in a scintillating 5-1 win with Edin Dzeko scoring four goals to become the Premier League’s top scorer with six in just three games. As the transfer window closed The Blues announced an unexpected signing when former England and Manchester United midfielder Owen Hargreaves joined City as a free agent on a one year deal. A two week international break followed and also the controversial resignation of Gary Cook as he became embroiled in an e-mail faux paus with Nedum Onuoha’s agent and mother Dr Anthonia Onuoha. City carried on after the international break with another entertaining performance as they beat Wigan 3-0 at The Etihad Stadium to sit equal top of the Premier League with Manchester United, both teams having taken twelve points from their first four games. And so to the the Holy Grail that is the European Champions League, as City met Napoli in their first ever game in the competition, an almost capacity Etihad crowd saw City draw 1-1. Back in the league and The Blues dropped their first points as they lost a 2-0 lead to draw 2-2 at Fulham. Roberto Mancini then gave his first team a rest and made eleven changes for the 3rd Round Carling Cup tie at home to holders Birmingham, and a very strong second string team won 2-0 with Owen Hargreaves scoring on his debut. three days later and 11 further team changes back to the strongest 11 in the Premier League City overcame their bogey side Everton beating them 2-0 in front of a home sell-out crowd. The UEFA Champions League then brought City their biggest challenge of the season as they played Bayern Munich at the Allianz Arena and lost 2-0, the defeat was overshadowed by the accusation by Roberto Mancini that Carlos Tevez had refused to come off the substitute’s bench with half an hour to go, the Argentinian was subsequently suspended for two weeks pending an enquiry. The Blues put their first defeat of the season behind them with an impressive 4-0 win at Blackburn in the Premier League, before the international break. City then issued a statement to say that their findings from Carlos Tevez’s investigatory had led them to believe that he had broken his contract and a disciplinary hearing was to be held shortly. After the international break City went two points clear at the top of the league as they beat Aston Villa 4-1 in an impressive display at the Etihad Stadium, David Silva picked up the Barclays player of the month award for September before the game, the same award had already been won by Edin Dzeko for August. It was a start to a history making week as just three days later City gained their first ever Champions League victory as a 93rd minute Auero goal at the Etihad Stadium gave the Blues a 2-1 win over Villarreal. At the final whistle at the Etihad the fans flooded onto the pitch to hail a truly memorable victory. Once the crowd were cleared fittingly Mike Summerbee and Francis Lee brought out the Premier League Trophy and just like the changing of the guard the anticipated succession from the 1968 team to the 2012 squad was complete as Vincent Kompany lifted the Trophy and there was not a dry eye to be had in the stadium. The next day the team enjoyed a civic reception at The Manchester Town Hall ans a crowd of over 100,000 cheered on as the trophy was held high on an open top bus parade around Manchester city centre.