After there relegation to Division 2 City were looking to bounce back at the first attempt, Les McDowell’s managerial duties had been disposed of George Poyser was now at the helm. With the Summer departures of Peter Dobing to Stoke for a fee of £37,500 and Alex Harley to Tottenham for a hefty £42,000 fee, Poyser looked to strengthen the squad pre-season with the purchase of striker Derek Kevan from Chelsea for a fee of around £35,000 and young keeper Alan Ogley from Barnsley for £8,000. 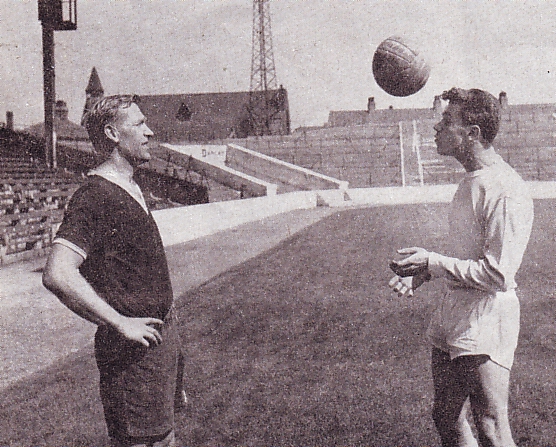 IAN OGLEY PRE-SEASON, AFTER HIS MOVE TO MAINE ROAD

The first game of the season didn’t give the Maine Road faithful much confidence for the promotion campaign as they were beaten 2-0 by Portsmouth, however City soon got on track drawing 2-2 at Cardiff then winning three games on the trot, 2-1 at Rotherham, then at Maine Road 4-0 against Cardiff and 3-2 against Leeds, new signing Kevan scoring five times in four games.
Typically the Blues then slipped up losing 3-0 at top of the table Swindon, and 2-0 at Sunderland, who were second placed in the league. a 0-0 draw in the return game against Swindon at Maine Road followed to leave City 13th in Division 2 after eight games.
George Poyser’s side clearly needed to find some consistency to have a chance of sustaining a promotion challenge and a good 3-0 win at home to Northampton and a 2-0 2nd round League Cup win over Carlisle was a good start, but a 1-1 draw at Bury and a 3-1 home defeat to Charlton quashed hopes of a good concerted league run.
two 1-1 draws followed against Plymouth at Maine Road and at Blundell Park against Grimsby, and despite a good 3-0 win at Hull in the 3rd round of the League Cup, City made it five league games without a win as they lost 3-2 at home to Preston.
The 14th and 15th league games of the season saw a good 3-1 win at Derby and a 1-0 home win against Swansea and an injury ravaged City, Hannah, Betts, Hayes and Wagstaffe all on the injury list, moved up to 9th, still with a small hope of a promotion challenge, sitting eight points behind league leaders Leeds.
In an attempt to boost the injury struck squad Poyser persuaded the board to layout £27,000 to bring in 28 year old striker Jimmy Murray from Wolves and he got off the mark in his debut at Southampton, unfortuantely the Blues lost 4-2. With the home match against Middlesbrough postponed, City then lost again on their travels in a 3-1 defeat at Newcastle.
Away from the pressures of the league City beat Leeds 3-1 at Maine Road in the League Cup 4th Round.
City’s good form at Maine Road continued as The Blues disposed of Huddersfield 5-2. and gained a further 2 points with a 2-0 win at Leyton Orient and a point in a 2-2 draw at Portsmouth to leave them ninth in Division 2 12 points off the summit.
The Blues gained a prestigeous spot in the League Cup semi-final with a 5th round 1-0 win at Notts County.
The festive period saw City score 18 goals in just three games, they beat Rotherham 6-1 at Maine Road, then on boxing day, again at home the blues slaughtered Scunthorpe 8-1 and two days later at The Old Show Ground Scunthorpe were beaten again this time the Citizens won 4-2.
The league form couldn’t be transformed to the FA Cup and City were knocked out in the 3rd Round losing at Swindon 2-1, then back in the league although City lost 1-0 at Leeds they were now in sixth position and had still given themselves a small chance of promotion.
Promotion and Cup hopes faded as City lost their next three games, they were beaten 2-0 at Stoke in the 1st leg of the League Cup semi-final then in the league they lost 3-0 at home to Sunderland then in a friendly lost 4-1 at Blackpool, back to the league lost 2-1 at Northampton, before a 1-0 win at home to Stoke in the semi-final 2nd leg which of course meant Stoke had won 2-1 on aggregate.
In the league City couldn’t ‘buy a win’ as they drew 1-1 at home to Bury, then lost 4-3 at Charlton and 4-0 against Grimsby at Maine Road, before a 2-2 draw at Middlesbrough.
Eventually at the tenth time of asking City got their first league win in 1964 as they beat Derby 3-2 at Maine Road.
The Blues lost 2-1 at Plymouth but then won at Maine Road again beating Middlesbrough 1-0. After 34 games City were now seventh in Division 2, 15 points behind leaders Leeds United.
The Blues return to winning ways could certainly be partly due to Jimmy Murray’s return to the team after a two month injury lay off and he went on to score in seven of City’s last eight games, the first in a 1-1 draw at home to Southampton and then again at Maine Road against Norwich where Derek Kevan also scored a hat-trick in a 5-0 victory.
There was a setback at Preston as the Blues lost 2-0, but then City won four games on the trot, 2-1 at Norwich, 3-1 at home to Newcastle, 2-0 at Huddersfield and 2-0 at Maine Road against Leyton Orient in the penultimate game of the season.
Three days earlier and Maine Road paid tribute to Bert Trautmann as An International XI played a combined Manchester City and Manchester United XI in his testimonial. After the game Bert Trautmann officially retired from playing and, although he was apparently promised a job would always be available at Maine Road, nothing transpired and he didn’t return to work at the club again.
On the eve of the final game of the season Dave Bacuzzi signed for City for a fee of £25,000 from Arsenal. The last game of the campaign saw City draw 3-3 at Swansea and finish 6th in Division 2 with 46 points. City played an end of season testimonial at Chesterfield, losing 5-4 to an International XI