On paper this was a game that United might have won without breaking sweat… City had a big worry, too. The following day they were due to meet Chelsea at Wembley in the first-ever Final of the Full Members’ Cup, a competition derided since its inception that season. A hard-fought derby game at Old Trafford was hardly the ideal preparation for the encounter, the Football League having refused a postponement of the United fixture. Manager Billy McNeill decided to play as many local players as possible, relying on the derby rivalry to give the team a lift. 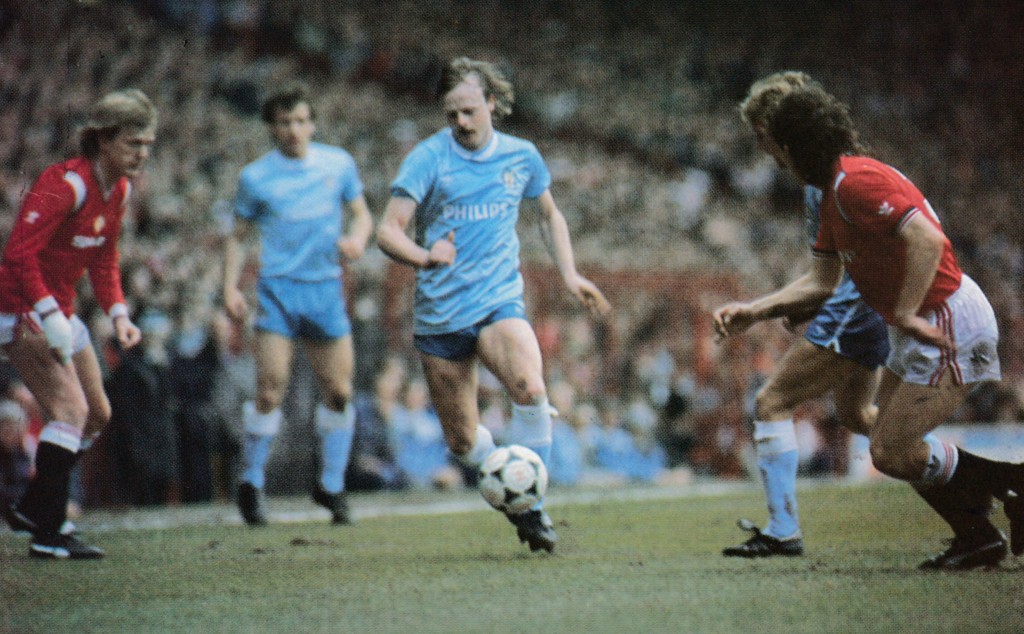 The afternoon was a special milestone for Steve Redmond, who was playing in only his third senior game. Standing in for the suspended Mick McCarthy, he was facing the expensive strike force of Mark Hughes and Peter Davenport. Steve was to have a “blinder”. …And then there was the unluckiest man in Manchester, City’s Kenny Clements. Kenny was to suffer a grievous injury during the game, which not only forced him to miss the Wembley date the following day but the rest of the season as well. After 96 seconds, the worst fears of the City fans were realised. United opened the scoring. Steve Kinsey had been the guilty man as he turned the ball towards Barcelona-bound Hughes, and Redmond brought the Welshman down to give away a free kick. The ball went to Colin Gibson who sent a sizzling drive into the net underneath Eric Nixon. After 59 minutes, United seemed to have sealed the outcome when Nicky Reid brought down Davenport and Gordon Strachan made it 2-0 from the penalty spot. But City were being sadly underrated, and the fightback began in earnest, orchestrated by the brilliant Neil McNab, who seemed to cover every square yard of the Old Trafford turf. There were only 19 minutes left when Clive Wilson pulled a goal back. A cross by Andy May at the end of a McNab-inspired move was deflected into Clive’s path and his diving header beat Chris Turner. Could the Blues snatch a point and force themselves into a more confident mood for the Final the next day? They could indeed. After 77 minutes, substitute Paul Simpson harassed Arthur Albiston, and the defender placed the ball into his own net. Turner had to make a series of astonishing saves as the Blues piled the pressure but the loss of Clements with badly-torn ankle ligaments meant a reorganisation within the ranks. Mark Lillis dropped back into defence. The fact remained that an exceptional effort by City had salvaged a point for the Blues and had pushed that elusive championship a little further away for Ron Atkinson’s team. City’s Reid summed it up thus “United always start quickly and then begin to run out of steam. It seemed to happen against us and I’ve noticed it about them whenever I’ve been at Old Trafford to watch them. “Even when they were two ahead, I felt that we might still have a chance. The more you stay in the game, the more chances you have of catching them out in the end:” McNab was highly acclaimed for his performance, as he would be the following day at Wembley when the Blues went down 4-5 to Chelsea. And Steve Redmond? His manager said: “He didn’t look like a youngster playing merely his third match in the first team. He added a calm authority to defence, and with no shortage of skill. He has developed very rapidly of late.” Let the last word rest with Clements. It was doubly hard for him because when the Blues had reached Wembley for the 1976 League Cup Final, he had been omitted and made substitute. He had been looking forward to this second chance of appearing in the national stadium, only to have it snatched away by a block tackle on Norman Whiteside. He limped out of the derby match, unable to hold back the tears of disappointment. “You’re always told to live with your disappointments in football,” said Kenny later, “and I’ve learned to always expect your share. But this was the cruellest experience I’ve had. “I just lost control of my leg, a very weird sensation. I could run straight without a problem, but when I came to turn left in an arc, my right leg was uncontrollable, swinging from side to side.” The player travelled down to London with the team and watched the exciting game from the bench. ADAPTED FROM AN ARTICLE ‘ONE TO REMEMBER’ IN THE CITY PROGRAMME 6TH APRIL 1996